Home News Halting the decline of biodiversity by 2030: the BIODEV2030 project officially launched in Benin 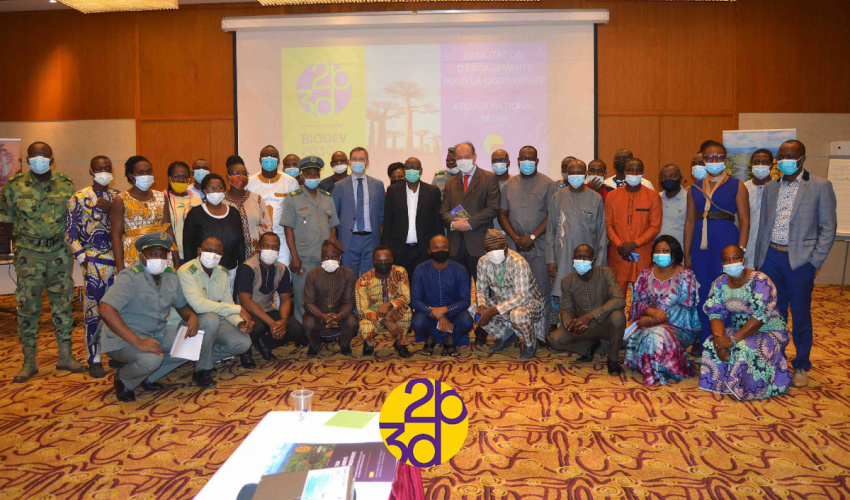 The national workshop for the launch of the project “Facilitation of commitments for biodiversity – BIODEV2030” and the restitution of the results of the assessment and prioritization of threats to biodiversity in Benin was held in Cotonou from 5 to 6 August 2021.

The workshop was attended by about fifty participants from the public administration, national institutions, research structures, the private sector, civil society organizations, local authorities and technical and financial partners. It aimed to share the results of assessments of the state of biodiversity and the various threats to them and to identify two key sectors that most impact biodiversity in Benin.

At the end of the meeting, participants examined the report of the results of the assessment on the diagnosis of the main causes of biodiversity loss using the STAR tool. This study carried out by the Laboratory of Applied Ecology of the University of Abomey-Calavi was presented to the participants by Prof. Brice Sinsin, former rector of the University of Abomey-Calavi.

The evaluation of ecosystems habitats of various taxonomic groups studied shows according to the literature review a trend of regression of their area between 2005 and 2015. Unanimously, literature data and expert opinions indicate a decline in the population of these species over time despite the presence of several forest massifs and biodiversity reserves representing about 25% of the national territory.

Participants also identified key sectors that influence biodiversity in Benin, including: agriculture and aquaculture (agriculture and fisheries sector); biological resource use (forestry sector: timber and NTFPs); and residential and commercial development (urbanization sector). These economic sectors with high impact on biodiversity in Benin will serve as a baseline for the “Facilitating Biodiversity Commitments” BIODEV2030 project to reduce pressures by 2030.

Various recommendations were made, including expanding the multi-stakeholder working group to other structures such as the Directorate General of Environment and Climate, the association of importers of agricultural inputs, customs, the Ministry of Economy and Finance, banks, etc.

It should be noted that the ratification of the Convention on Biological Diversity by Benin in June 1994 is evidence of its clear political will to ensure the conservation and sustainable use of biological diversity. This will of the country was concretized by the development of a strategy and a national action plan on biodiversity in order to stop the loss of biological diversity by 2020. Despite these efforts, Benin continues to experience biodiversity loss.

The “Facilitation of Biodiversity Commitments – BIODEV2030” project is being implemented in Benin by the International Union for Conservation of Nature (IUCN) through funding from the Agence Française de Développement with the partnership of Expertise France. IUCN, for a better efficiency, relies in its intervention in Benin on the NGO Eco-Benin in collaboration with the Focal Point – Convention on Biological Diversity in Benin.

During the 17 months of the project BIODEV2030 will create the conditions for a national dialogue involving stakeholders around strategic and relevant economic sectors. This dialogue aims to catalyze concrete national and sectoral voluntary commitments to reduce pressures on biodiversity over the next decade. The voluntary contributions of stakeholders will be a major step towards building ambitious common goals for biodiversity conservation.

Following the workshop to launch the BIODEV2030 project, a stakeholder consultation mission across the country took place from 11 to 17 August 2021 and confirmed the prioritization of threats to biodiversity. The team was composed of the Technical Assistant of the BIODEV2030 project, the focal point of the Convention on Biological Diversity in Benin and a team from the Applied Ecology Laboratory. It conducted the assessment of threats to biodiversity in Benin and consulted stakeholders throughout the country. Indeed, the study of evaluation and prioritization of threats to biodiversity in Benin revealed two strategic sectors: agriculture and aquaculture and the use (harvesting) of biological resources. This mission, which follows the national workshop to launch the BIODEV2030 project, aims to consult with the various stakeholders involved in these two sectors.

In West Africa, the BIODEV2030 project is being implemented in Benin, Burkina Faso, Guinea and Senegal.

Previous Post Fight against environmental crime: actors at the bedside of the PoMoCo complex
Next Post Management of mangrove forests: the professionals of the sub-region at the Bissau-Guinean school

1 thought on “Halting the decline of biodiversity by 2030: the BIODEV2030 project officially launched in Benin”