Home News Biodiversity: The implementation plan of the BIODEV2030 project submitted to the appreciation of the CSOs of Benin 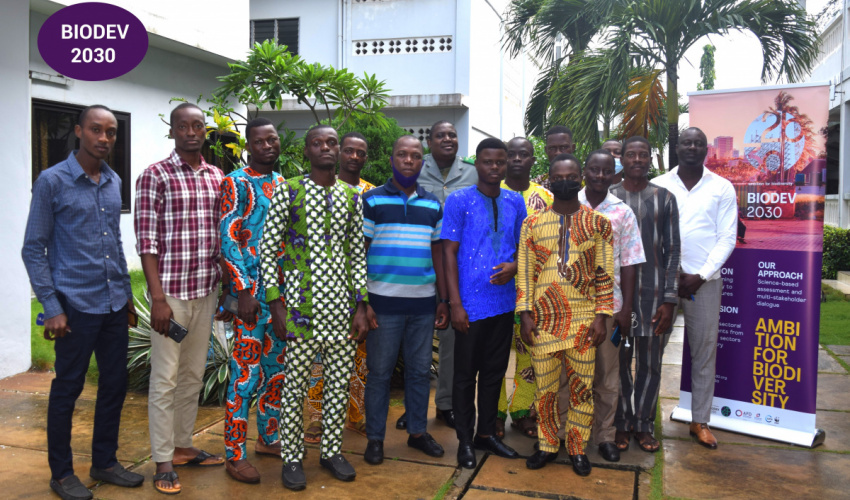 As part of the implementation of the BIODEV2030 biodiversity facilitation project, the NGO Eco-Benin in collaboration with the General Directorate of Water, Forests and Hunting (DGEFC) organized an information and consultation session for actors from Civil Society Organizations (CSOs) and IUCN member NGOs at the Chant d’oiseau on June 30, 2021.

This exchange meeting aimed to make a detailed presentation of the project facilitation of commitments for biodiversity BIODEV2030 and to collect the various recommendations of the participants for the establishment of a multi-actor working group. About twenty participants representing the following organizations took part in the session: Eco-Bénin, CREDI ONG, BEES ONG, Action Plus, IDID ONG, GRABE ONG, AVPN, ODDB, Pro-Environnement and the platform of Civil Society actors of Benin. The meeting was opened by the National Coordinator of the NGO Eco-Benin, Mr. Gautier Amoussou and the Focal Point of the Convention on Biological Diversity, Captain Orou Augustin Matilo, and chaired by Mr. Is Deen Akambi, Technical Assistant of the project in Benin.

The main lines of the BIODEV2030 project were presented, notably: the global programming of activities, the objectives of the multi-stakeholder working group, its composition and functioning. The representatives of the different NGOs invited to the session made their observations and recommendations in order to improve the proposals made.

The BIODEV2030 project is committed to encouraging sectoral commitments in favor of biodiversity conservation. This, through a strategic approach: a multi-stakeholder dialogue based on a scientific diagnosis. It is in this field of vision that the multi-stakeholder working group involves all the stakeholders of the BIODEV2030 project in Benin. It is composed of about forty people: state actors, laboratories, private and public sector actors, umbrella organizations, associations and funds that all fall within the scope of the project. “The multi-actor working group is well diversified and representative. This set of actors will understand that each sector is a key link in the survival of humanity,” said Georges Hedegbetan, representative of CREDI ONG.

The information and consultation session with CSO and NGO members of IUCN was deemed satisfactory. According to Mariano Houngbédji, President of the Organization for Sustainable Development and Biodiversity (ODDB), “the information session is a good initiative that allows the project managers to inform the actors active in biodiversity conservation and to concretely define their contribution to the achievement of the project’s objectives.

To close the session, the program of activities of the BIODEV2030 project, scheduled for the IUCN World Conservation Congress (Marseille, 3-11 September 2021) was briefly presented. In their closing remarks, the organizers thanked the participants for their contributions to improve the implementation of the BIODEV2030 project and promised to integrate the various recommendations made. This validation stage will be followed by the official launch of the project in July 2021.

Previous Post Popularization of texts, policies and laws on water, environment and climate in West Africa and Benin
Next Post Benin: WACA monitoring and evaluation specialists trained in the use of geographic information systems